Is it Racist, Discrimintory, or Stupid?

I never claim to have all the answers or always to be correct. For this post I need your help because I can not reconcile how I feel. A couple of days ago I saw this sign and my brain locked up! I could not figure out how I was feeling. Was I angry, was I dumbfounded, did I agree, was I over-analysing. WTF was going on in my head over this seemingly simple sign. Is this statement Racist? Are they unfairly targeting minorities / African-Americans? Are they profiling? are they discriminating against our youth? Can they legally enforce this policy? Who died and made them the GOD of choice or good taste. The more I stared at the sign the angrier I became and the more confused I became. As you my savvy followers already know from my last post on this saggy / baggy pants issue and what I am trying to carry out with this site. That this is touchy for me. Go back and read that last post here https://breakitdownpete.wordpress.com/2011/08/05/baggy-pants-seriously/ and you will understand why I feel the way I feel about this sign. Well now it’s your turn to answer some of these questions that I am having such a hard time answering. Is it racist? First thing to consider. Do only minorities wear saggy pants or hoodies? My answer is NO. But then they had to throw in the DU-RAG. Now this I do tend to associate with minorities, specifically African-Americans. What say you? Next to consider, are they profiling? My answer is Yes. But Are they? Are they associating this style with the dangerous, the disruptive, the un-educated, the troublemaker? Or are they just stupid and over reacting to their customers who do not like this style? Did their customers even complain? or is this company jumping the gun anticipating this to be a problem with their customers. Are their customers racist? and aren’t the people who chose this style also their customers? after all this is a business geared towards the young. Should we now judge people by their taste and style of clothing? How about people who wear skinny jeans, wife beater tee shirts, piercings, tattoos etc.If you are wearing a hoodie are you a trouble maker or predator or are you just cold and this is a comfortable multi purpose sweater / jacket. If you wear a Du-rag are you a rapper, drug dealer? If you wear baggy / saggy pants are you a gang banger or a recently released convict? Maybe yes and maybe no to these questions. But should you be judged any more for your choice in clothing than say a woman is judged by her clothing when she is sexually attacked because of how she dresses. Or should we judge a wall street worker by the suit he wears and assume he is good and financially secure when in reality maybe he is a financial phony deep in debt, a schemer running a Ponzi scheme, or a wife abuser, cocaine addict. So what is this sign really saying? Is it saying we don’t want your kind, your trouble making kind, your minority kind, your black kind…. Am I completely wrong on this one? Am I over reacting? I just feel so strong that we need to educate our youth and guide them, not minimise and push them away. 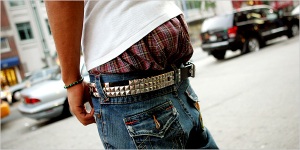 Seriously i am about to let everybody have a piece of my mind on this one! For you self-righteous, stick up the ass, politically correct, i am better than you assholes. I’m gonna need you to back the f-up. Are you shitting me? This style bothers you enough to enact laws against it. How about skinny jeans on guys? speedos? Tattoos? Etc. Etc. Etc. Get a grip! Unless you are showing your private parts you should be able to embarrass yourself with the style of clothing you choose. Ohhhh man now for the culprits who wear this style. Wake the f-up! Don’t even give me your bullshit talking points about how this is your statement against the society who oppresses you or I’m gangster, i represent. Represent what? That you are clueless, that you want to perpetuate the stereo type of our immature youth. Represent who? The other fools in your circle, your street corner who are going nowere fast. Stop kidding yourself . How many grown, intelligent, professional’s do you know who dress like this. This style is played out and for kids.Dressing like this for approval from losers on your block is stupid. Come on lets move on and be proud, be strong, be grown and build a positive life for yourself. I believe in you and you should believe in yourself and know that you are better than this! I copied and pasted the following articles from news sources.

sagging pants, a style popularized in the early 1990s by hip-hop artists, are becoming a criminal offense in a growing number of communities.

Behind the indecency laws may be the real issue — the hip-hop style itself, which critics say is worn as a badge of delinquency, with its distinctive walk conveying thuggish swagger and a disrespect for authority. Also at work is the larger issue of freedom of expression and the questions raised when fashion moves from being merely objectionable to illegal.

Starting in Louisiana, an intensifying push by lawmakers has determined pants worn low enough to expose underwear poses a threat to the public, and they have enacted indecency ordinances to stop it.

Since June 11, sagging pants have been against the law in Delcambre, La., a town of 2,231 that is 80 miles southwest of Baton Rouge. The style carries a fine of as much as $500 or up to a six-month sentence.

An ordinance in Mansfield, a town of 5,496 near Shreveport, subjects offenders to a fine (as much as $150 plus court costs) or jail time (up to 15 days).  the law, which takes effect Sept. 15, will set a good civic image.

Sagging began in prison, where oversized uniforms were issued without belts to prevent suicide and their use as weapons. The style spread through rappers and music videos, from the ghetto to the suburbs and around the world.

The American Civil Liberties Union has been steadfast in its opposition to dress restrictions. Debbie Seagraves, the executive director of the A.C.L.U. of Georgia said, “I don’t see any way that something constitutional could be crafted when the intention is to single out and label one style of dress that originated with the black youth culture, as an unacceptable form of expression.”

Not since the zoot suit has a style been greeted with such strong disapproval.

Following a pattern of past fashion bans, the sagging prohibitions are seen by some as racially motivated because the wearers are young, predominantly African-American men.

Yet, this legislation has been proposed largely by African-American officials. It may speak to a generation gap. Michael Eric Dyson, a professor of sociology at Georgetown University and the author of “Know What I Mean?: Reflections on Hip Hop,” said,  “They’ve bought the myth that sagging pants represents an offensive lifestyle which leads to destructive behavior.”

Benjamin Chavis, the former executive director of the N.A.A.C.P., said, “I think to criminalize how a person wears their clothing is more offensive than what the remedy is trying to do.”

News One is reporting that a small town in Georgia has passed a law in which they will fine men who wear “saggy pants” $50  for their first offense. Hampton will fine men $100 for the second offense, and third-time offenders will be charged $200.

We wonder who will be targeted (tongue implanted firmly in cheek). Plenty of folks wear saggy jeans, but it bothers some so much that they would fine those people for a poor fashion decision? Aside from the fact that saggy pants have long been played out and we really don’t understand why anyone outside of prison would wear the look, what is the need to fine folks? Is there nothing else going on in Hampton, Ga.?

Other than freedom of choice, we don’t know why young black men continue to insist on wearing this look, any more than some of us insisted on wearing high-top fades, super baggy jeans, Coogi sweaters or Cross Colors way past the expiration date. If young people choose to do so, then they should be able to do it. Hopefully they will grow out of it, and if they don’t, we’ll talk about them behind their backs like everybody else and keep it moving. We don’t fine them for being fashion backward.

Besides, until they start fining people for wearing flip-flops (often with no pedicures in sight) in business spaces and low-cut jeans, we can’t get behind this one. We’ve seen enough plumber’s crack and muffin tops to last a lifetime.